For followers of Jesus, even thinking about child abuse is enough to make us recoil in horror - but the sad fact is, these terrible abuses happen every day all over the world. Thankfully, there are Christians who are stepping out in faith to do something meaningful to help traumatized victims of poverty, sex crimes and abuse. One such visionary is Susan Vonolszewski, who in 2009, began developing a unique resource for use by ministries wanting to reach out to those traumatized victims and their caregivers.

As someone who gained insights from Crisis Care Training International, Susan knew that whatever ministry tool was developed, it would need to touch people at a deep level. She searched for answers to daunting questions like, "What can you give a young girl traumatized by sex trafficking and abuse? How do you comfort an orphan who has lost his mother and father to AIDS?" Susan had these and many other questions in mind as she prayed to the Lord for wisdom and guidance.

God began answering those questions and a team soon began to emerge. Initially encouraged by Bible storying concepts championed by J.O. Terry, Susan began working closely with Guy Piersall of Global Recordings Network and also with the MegaVoice team. The outcome of this collaborative effort to help traumatized children was the Wildlife STORYTELLER.

Wildlife STORYTELLERS are cuddly, stuffed, tigers, elephants, bears and other animals that feel soft to the touch. Each of these "special little critters" has a cloth pocket carrying a solar-powered MegaVoice audio player loaded with Bible stories and Gospel messages in the language of the child. Bible stories and messages for the players are available in thousands of languages, making it possible for ministries to reach children in almost any language.

As Wildlife STORYTELLERS began to be distributed by Vision Beyond Borders, Hope of Life International, Open Door Ministries for the homeless and other ministries in 2010, children experienced gentle love as they cuddled their own little animal and listened to stories about Jesus' love.

Susan relates one encounter she had with a handicapped Guatemalan boy after he had been given a stuffed tiger by an indigenous evangelist working with Hope of Life International...

"The second the child felt the tiger's soft fur, his face lit right up. When he pushed the little audio button, the tiger began to tell him a Bible story - in his own language. I watched him sitting there hugging his new friend, smiling and listening. Today this little boy knows Jesus loves him - and he has a soft, cuddly animal friend that is all his own."

The MegaVoice audio player inside each stuffed animal has a large play button that controls the volume level, advances to the next story, and pauses. If the player is left unattended it simply stops by itself. The solar panel will recharge the battery hundreds of times just by placing the player in the sun. 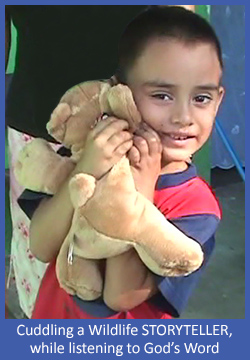 For the past few years, Wildlife STORYTELLERS have brought physical and emotional comfort to children and adults who have experienced trauma and pain. They are helping children caught in poverty, disease and disaster to feel God's love, even as they hear about the hope He gives.

Thanks to the pioneering efforts of Susan Vonolszewski, GRN and MegaVoice, ministries everywhere can now reach across the globe and wrap the comforting arms of God around hurting children through these loveable, Scripture-playing animals.

No matter what people group your team is ministering to, the tigers, elephants, bears and other animals can be loaded from a Scripture audio library holding thousands of languages and dialects. The MegaVoice Envoy audio player can be loaded with Bible stories spanning Old and New Testaments, giving a child a strong biblical foundation for the Christian faith.

A selection of chronological and topical stories are available offering a broad spectrum of general Bible knowledge to any child or caregiver.

If your ministry would like to use Wildlife STORYTELLERS to help you carry out your God-given ministry and holistic mission efforts, we would love to partner with you.

Wildlife STORYTELLERS were strategically developed to help ministries make a long-lasting impact on children around the world. From children in crisis to those who have never even heard of Jesus, they make an eternal difference. If you or your ministry would like to have these effective tools for your ministry, please contact MegaVoice.